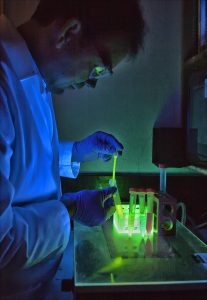 Structure/function relationships in the arrestin protein. The function of arrestin to inactivate rhodopsin in phototransduction was well established by several laboratories in the 1980’s. However, the mechanism by which arrestin selectively binds and quenches only light-activated, phosphorylated rhodopsin was unclear and has significant implications for the majority of the G-protein-coupled receptor family. Work in our lab and with a team of collaborators mapped the surface of arrestin that interacted with rhodopsin. This work was the first to demonstrate that multiple smaller conformational changes in arrestin, rather than large domain movements, were responsible for driving the selectivity of arrestin for phosphorylated, photoactivated rhodopsin, a finding that has been born out for the broader class of G-protein-coupled receptors.