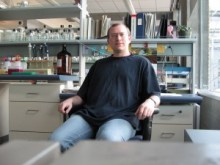 Dr. Dyka earned his PhD in Biochemistry and Molecular Medicine from the University of Erlangen-Nürnberg, Erlangen, Germany for his work on glaucomatous degenerations. He then undertook postdoctoral training at the University of British Columbia, Vancouver, BC, Canada where he received two postdoctoral fellowships to continue his studies. During this time he conducted extensive research on X-linked retinoschisis and retinitis pigmentosa.

His interest in retinal degenerations brought Dr. Dyka to the Department of Ophthalmology at the University of Florida in Gainesville to develop novel gene therapies for Usher syndrome and various retinal disorders. His research is focused on adeno-associated virus mediated gene replacement therapies. Apart from that he is also interested in the molecular causes for retinal degenerative diseases.

One focus of his research attempts to expand the packaging limitations of AAV by developing dual vector systems. Disorders like Usher syndrome 1B and recessive Stargardt’s disease are caused by mutations in large genes exceeding the 4.9kb payload limit of AAV. Dual vectors which carry parts of a gene are able to restore the complete gene through recruitment of the recombination machinery in cells. This work is currently applied to proof-of-concept studies of Usher syndrome and recessive Stargardt’s disease.

In another project Dr. Dyka is developing cell type specific promoters for use in AAV. Many retinal disorders are caused by mutations in genes which are specific to a certain cell type. The loss of these cells leads to a secondary loss of other cells. Another reason for using cell type specific promoters is based on the knowledge that expression of proteins from a ubiquitous promoter might be damaging to cells not directly affected by the mutated gene. Some promoters developed by Dr. Dyka are currently being tested for their potential utility in treatments for achromatopsia and congenital stationary night blindness.