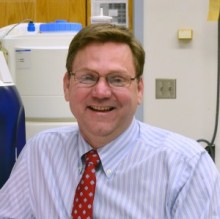 Dr Ash received his Bachelor of Arts degree in Biology in 1986 from Austin College in Sherman, Texas. Dr. Ash earned his Ph.D. in Biochemistry from The Ohio State University 1994.  Dr. Ash has been engaged in Vision Research since 1994 when he accepted a postdoctoral fellowship in Ocular Cell Biology under the mentorship of Dr. Paul Overbeek at Baylor College of Medicine, in Houston, Texas.

Dr. Ash’s research is focused on both understanding the cause of blindness due to retinal degeneration and developing therapies to prevent loss of sight.  His research is relevant to inherited retinal degenerations such as retinitis pigmentosa, cone-rod dystrophies, LCA, or age related macular degeneration. His most recent studies have shown the important contribution of endogenously expressed cytokines such as leukemia inhibitory factor (LIF).  His work has shown that these cytokines are expressed under conditions of stress, and that the increased LIF is important to prevent or delay photoreceptor or RPE cell death under chronic stress conditions, including inherited mutations known to cause blindness.  Work from his lab has demonstrated that loss of the LIF receptor, gp130 or it’s signaling intermediate STAT3, results in accelerated retinal degeneration.  The results from this work have broad implications in the understanding of human inherited retinal degeneration.  In humans, disease-causing genes are present before birth; however patients inheriting those mutations that cause retinitis pigmentosa or age related macular degeneration typically do not develop disease for 40 to 80 years.  Dr. Ash’s work suggests that LIF and its receptor gp130 keep cells alive and functioning, and serve to delay the onset and progression of disease.  Variation in efficiency of this internally protective activity could also be a partial explanation of why family members who inherit the same mutation can have a wide range in the age of onset and severity of disease.   This work has led to the identification of drug targets to promote cell survival, and has led to the development of several gene therapy approaches to specifically enhance the survival of photoreceptors and RPE which are now being tested in models of disease.

Dr. Ash has a strong commitment to vision research as demonstrated by his role in multiple national and international societies.  He was elected to serve a three-year term on the Scientific Program Committee for the Association for Research in Vision and Ophthalmology, representing the Retinal Cell Biology section. He is permanent member of the Organizing Committee for the International Symposium on Retinal Degeneration.  Dr. Ash has served on the program committee for the American Diabetes Association annual meeting for which he reviewed program abstracts on ocular complications.  He also serves on the Scientific Advisory Board for the Foundation Fighting Blindness and was recently appointed as chair of their Novel Medical Therapies grant review committee. Dr. Ash serves on the International Panel of Experts for Fighting Blindness Ireland.  In addition, he is on the grant review panels for American Health Assistance Foundation.  He is an executive editor for Experimental Eye Research and Scientific Review Editor for Molecular Vision.  Dr. Ash is also a Co-editor for book on Retinal Degeneration published in 2012, and the primary editor of a 110 chapter Retinal Degeneration book to be published in 2013.