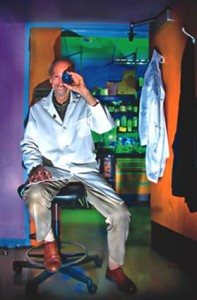 Dr. Hauswirth received his B.S. in Chemistry from StanfordUniversity and his Ph.D in Physical Chemistry from OregonStateUniversity.  After an NIH Fellowship in the Biochemistry Department at JohnsHopkinsUniversity, he joined that department as an Assistant Professor.  In 1976, he joined the faculty of Molecular Genetics and in 1985 the Ophthalmology faculty at the University of Florida College of Medicine.

Before turning his attention to the retina, while at UF Dr. Hauswirth is, in part, responsible for determining the mechanism of replication of adeno-associated virus (AAV) DNA, the discovery of mitochondrial DNA heteroplasmy in mammals, the basis of mitochondrial disease, and ancient human DNA.  More recently he collaborated on the first successful rescue of a dominant genetic disease in animals (ribozyme treatment in a Retinitis Pigmentosa model in rats) and the first restoration of vision for a recessive retinal disease (congenitally blind Briard dogs).  He also demonstrated that AAV mediated gene therapy could cure red-green color blindness in monkeys.

Dr Hauswirth has a long-term interest in the delivery and testing of potentially therapeutic genes for Dominant, Recessive and X-Linked Retinitis Pigmentosa, Leber Congenital Amaurosis, Achromatopsia, Blue Cone Monochromacy, Usher’s Disease, Macular Degeneration, Diabetic Retinopathy, Glaucoma and Optic Neuropathies in natural and transgenic animal models of each human disease. He has been/is principal investigator on numerous NIH and private foundation grants supporting this work. He is also coPI on a related clinical trial grant for LCA2 in which the patients began treatment in 2007 and in which 12 of 15 have gained significant visual function.  In collaboration with Genzyme Corp. and AGTC, Inc, he has developed a gene-based therapy for the wet form of AMD, with the first patients treated in early 2010.  Dr. Hauswirth made the GMP vector and carried out the safety studies for an on-going gene therapy clinical trial in Saudi Arabia for MERTK disease. He also collaborates with more than 70 PI’s around the world, by designing and providing them AAV vectors (~100 per year) for disorders affecting essentially all parts of the eye.

Dr. Hauswirth has authored over 300 articles and reviews, and is currently on the editorial boards of several journals.  He has frequently served as a member of several different NIH/NEI Study Sections, and has also served as either a permanent or ad hoc member of research panels for other NIH Institutes, the NSF, the USDA, the National Geographic Society, the American Heart Association, the March of Dimes, the Foundation Fighting Blindness and the Macula Vision Research Foundation as well as consulted on research grants for the United Kingdom, France, Italy, Japan, Belgium, Denmark, Finland and Kuwait. He is currently on the Scientific Boards of The Foundation Fighting Blindness and the Macula Vision Research Foundation.  Over the past 25 years Dr. Hauswirth has received short-term professorships from Oxford University, University of Edinburgh, University of Paris and University of Pavia.   He was awarded the 2001 Alcon Award for Vision Research, the 2002 Foundation Fighting Blindness Trustees Award, the 2004 John Kayser International Award for Retinal Research, 2005 FASEB award to lifetime achievement in vision research, the 2011 Foundation Fighting Blindness Director’s Award, the 2011 International Gold Award of the Chinese Ophthalmological Society and the 2013 Llura Liggett Gund Award for Lifetime Achievement from the Foundation Fighting Blindness.  Additionally he was voted the 2005 Scientist of the Year for the Hope for Vision Foundation, Florida Scientist of the Year in 2009, his work recognized as Time Magazine’s third most important science discovery for 2009 and his work was cited in “A Decade of Breakthroughs” by Science Magazine.